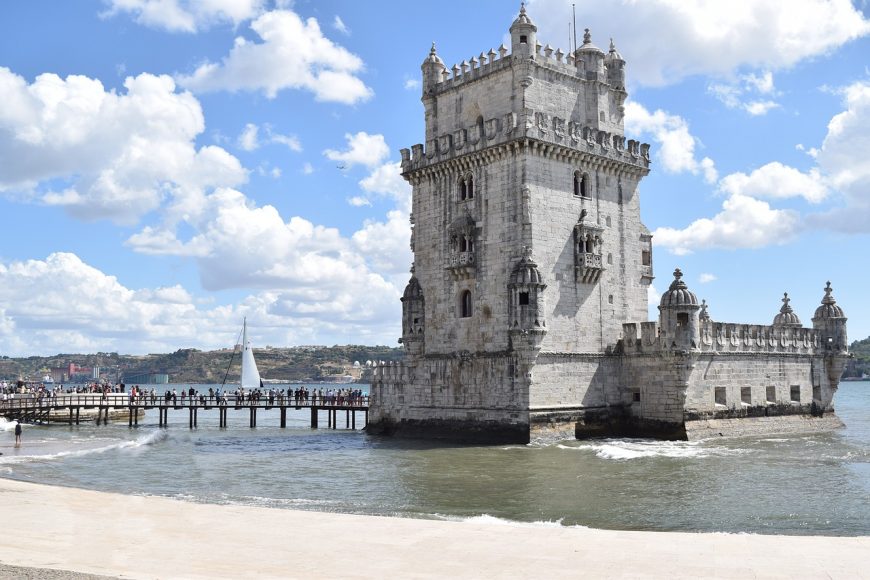 Belém Tower: it’s an iconic part of Lisbon and the most famous landmark of Portugal. This UNESCO World Heritage Site symbolizes the Age of Discoveries and achieved this designation in 1983.

It’s also one of the Seven Wonders of Portugal! I know, I’m wasting all my fun facts about the Belém Tower right in my intro! But there are so many cool things to learn about the Lisbon landmark that I had to throw a few up front.

The tower has been watching guard over Lisbon since 1519 and attracts hundreds of thousands of visitors every year. Check out these five things you probably didn’t know about Belém Tower to inspire your own exploration of this Lisbon attraction.

King John II commissioned it but died before it was complete so King Manuel I kickstarted construction. Which is why the tower has incorporated the Manueline style.

Manueline style is typically defined as Portuguese late Gothic-style and is a combination of influences. Manueline style often includes maritime elements and symbols, like ropes, anchors, and shells.

The architect was Francisco de Arruda—and it only took five years to complete.

When it was first complete, the fortress was named Torre de São Vicente de Belém after the patron saint of Lisbon.

2. The location has moved

Originally the tower was built on an island of its own, but it has shifted closer to the mainland and riverbank due to the earthquake of 1755 which redirected the Tagus River.

3. The dungeons were used as prisons until 1830

After a battle in 1580 with Spain’s Duke of Alba, the Portuguese realized they needed more prisons to hold enemies and Belém Tower proved to have the room. The prisons were in use until 1830.

There are some well-known discoverers that departed from Belém, including Vasco da Gama, Prince Henry the Navigator, Bartholomeu Dias, Ferdinand Magellan, and even Christopher Columbus made a stop here on his way back to Spain.

It’s a very popular landmark, so it’s best to plan ahead if you want to explore this Lisbon landmark! It takes about 30-45 minutes to tour the tower and you do need a ticket to enter. Expect crowds and lines, especially during the peak season.

What’s your favorite fun fact about Belém Tower? Tell us in the comments below!

How to plan a digital detox

Munich: What to know before you go