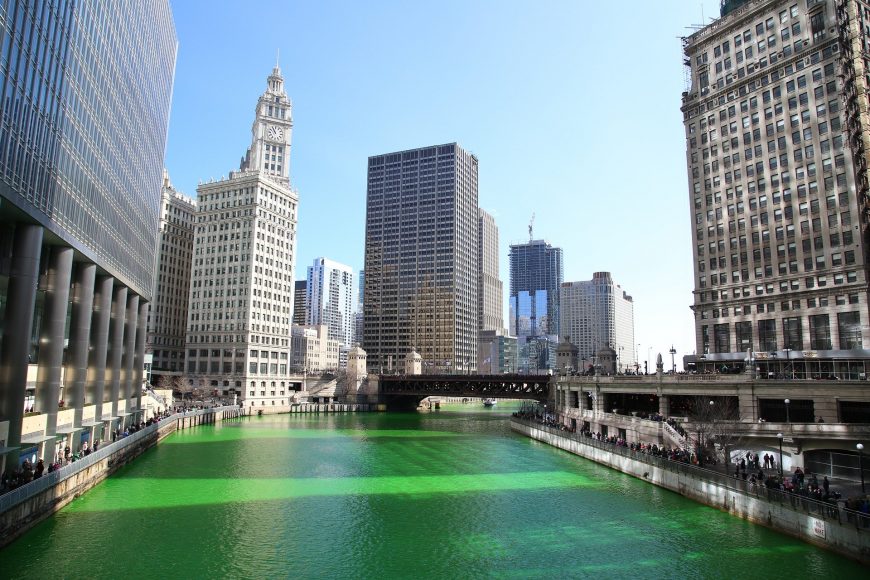 March is the month of green, kisses, pinches, and lots of beer and whiskey – some of it Irish. Here in the US, we love adopting other culture’s holidays (especially if they involve drinking) and St. Patrick’s Day is no exception.

In big cities around the country expect everyone to be decked out in green, telling you the percentage Irish their DNA test revealed, and imbibing green beer on St. Patrick’s Day. I think we have a soft spot for St. Patrick’s Day because it’s finally feeling like spring, we get to watch a fun parade, and then drink Irish car bombs until it’s time to go home.

If you’re looking to travel for the holiday or want to visit a city that’s known to throw quite the party in honor of St. Patrick’s Day, look no further than these top destinations in the US!

Top 5 cities in the US to celebrate St. Patrick’s Day

Every year the Chicago River is dyed a sparkling emerald green in honor of the Irish holiday and the city is home to the most St. Patrick’s Day parties per capita – so the Windy City is ready to down some green beer and party! Chicago also hosts an annual parade that features Irish dancers, bagpipers, and Clydesdales, and has been a tradition for more than 60 years.

Boston is another extremely popular destination in the US for St. Patrick’s Day and a great place to celebrate your Irish heritage, or at least pretend while you’re there. Beyond a great parade, there are Irish concerts, a film festival, and other forms of live entertainment. Boston is said to have a large number of Irish descendants and they bring their A game when it comes to celebrating the holiday. If you can, get into the House of Blues for great live music, including an appearance by the Dropkick Murphys.

Philadelphia is another city that’s known for its St. Patrick’s Day traditions, parties, and parades. In fact, Philadelphia can claim that they have the second-oldest St. Patrick’s Day parade in the US as it’s been a part of the celebration since 1771; New York City can claim the oldest. This year’s theme for their parade is 250 Years of Faith, Family, Friendship and Heritage.

According to WalletHub, Tampa is tied with New York City, Chicago, and Seattle as having the most Irish pubs and restaurants per capita and they definitely like to welcome the holiday with gusto. Besides the bars, Tampa might be luring most to celebrate St. Patrick’s Day in Florida with its gorgeous weather and sunshine. There are plenty of pub crawls, street parties, concerts, and even a parade at night!

Of course I had to say my home as we have an awesome St. Patrick’s Day Parade, fun Irish pubs, and we love celebrating any holiday that features copious amounts of beer (ahem, Oktoberfest, ahem). People flood downtown Denver and turn it into a sea of green for the holiday. Our weather can be hit or miss, I’ve had St. Patrick’s Days here that are 75 degrees and some that are 40, but once you’re inside warming up with an Irish whisky it doesn’t matter either way.

Do you travel to celebrate St. Patrick’s Day? Tell us your favorite city to party in in the comments below or on Twitter!

10 fall things to do in Denver