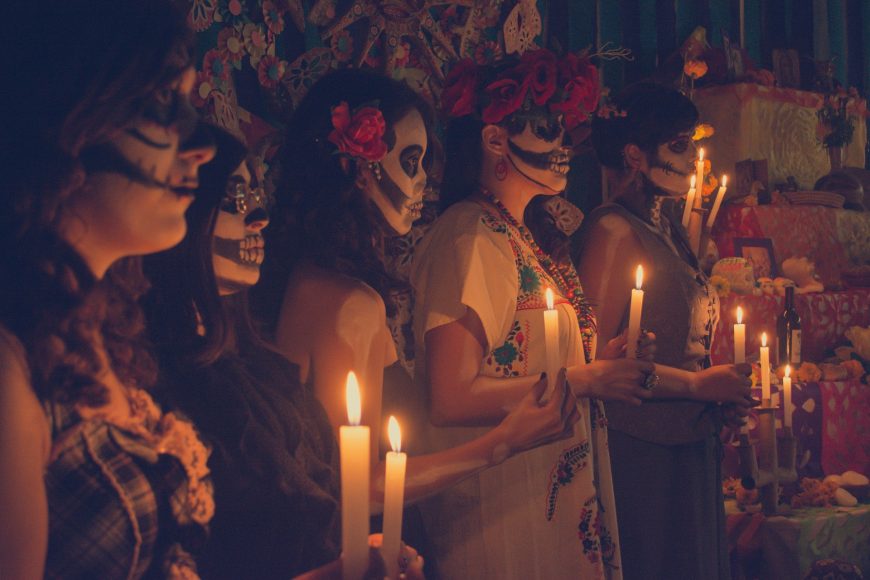 Dia de los Muertos is an important holiday in Mexico and is not to be confused as the Mexican version of Halloween. While we treat Halloween, or All Hallow’s Eve as “a night of frolic! Where children wear costumes and run amok!” At least according to Hocus Pocus that is.

In America, we treat Halloween as an evening filled with mischief where we ask our neighbors “trick or treat?” and dress up as something scary or someone wearing a scary lack of clothing. But our southern neighbor treats Dia de los Muertos, or Day of the Dead, as a social and lively holiday. They do dress up as skeletons and masterfully paint their faces, but it’s not to be intimidating or scary but to welcome their dearly departed and guide them home.

Day of the Dead is a holiday that recognizes that death is a part of life and through ceremonies and traditions, we can show love and respect for the deceased and welcome them back home in celebration instead of mourning.

Since Day of the Dead is right around the corner, I thought it’d be fun to share some trivia and fun facts about the Mexican holiday.

5 things you might not know about Dia de los Muertos

1. It’s a celebration, and not meant to be scary

Instead of fearing death or staying in mourning, Day of the Dead is seen as a celebration of life and the life after and is a holiday that’s filled with humor and happy memories. There’s a reason the festivities are so colorful and lively, it’s to help guide the departed souls home to their families where the living can reminisce about them and share funny stories as a family.

On October 31, preparations are made for the holiday, like constructing the altars, preparing food, buying flowers, and decorating the graves.

November 1 is known as All Saints Day and specifically celebrates Dia de los Santos Inocentes, which honors departed children. Then comes November 2 or All Souls Day which welcomes every soul back to Earth.

I have pictures of my family members that have passed on, but I haven’t set out any food for them yet, but that’s what an altar’s purpose is for Day of the Dead.

An altar or ofrenda for this holiday will generally have pictures, the deceased’s favorite food and drink, candles, candy skulls and pan de muerto (bread of the dead), marigold flowers, and toys for children and booze for the adults. The ofrenda provides the things the spirits might need on their journey back to the realm of the living, as well as reminders of their lives.

Marigold flowers are the flower of choice for Dia de los Muertos and are scattered from the altar back to the cemetery to guide spirits back to their final resting place. You’ll often see altars done in orange and purple hues with the traditional papel picado to signify the element of wind.

4. Food is an important element

I already mentioned the candy skulls and pan de muerto as the food of choice for the holiday and these two items have deep significance and roots to the day. The candy skulls are made from sugar cane and then dyed the colors of the rainbow.

Pan de muerto is a sweet bread that’s coated in sugar and then decorated to look like a pile of bones. Mexico definitely has a sense of humor when it comes to death.

5. It involves hanging out in the cemetery

Around Halloween, graveyard ghost tours become popular but most of us wouldn’t want to spend the night there – but those celebrating Dia de los Muertos sometimes sleep over in the cemetery. In traditional slumber party style, they bring blankets and pillows, and an extra set or two so visiting souls can take a rest.

Instead of ghost stories though, families share stories and remembrances of those they’ve lost, have candlelight vigils, and share a meal together.

On October 31 in the United States we’ll be out trick or treating or trying our best to scare friends and family, but our southern neighbors will be preparing for a fun and life-affirming holiday. I wish we celebrated Dia de los Muertos here and took a page out of Mexico’s book on how to handle death and treat it with the respect, and humor, it deserves.

Did I miss anything from my fun facts about Day of the Dead? Tell me in the comments below or over on Twitter!

A weekend getaway in Glenwood Springs