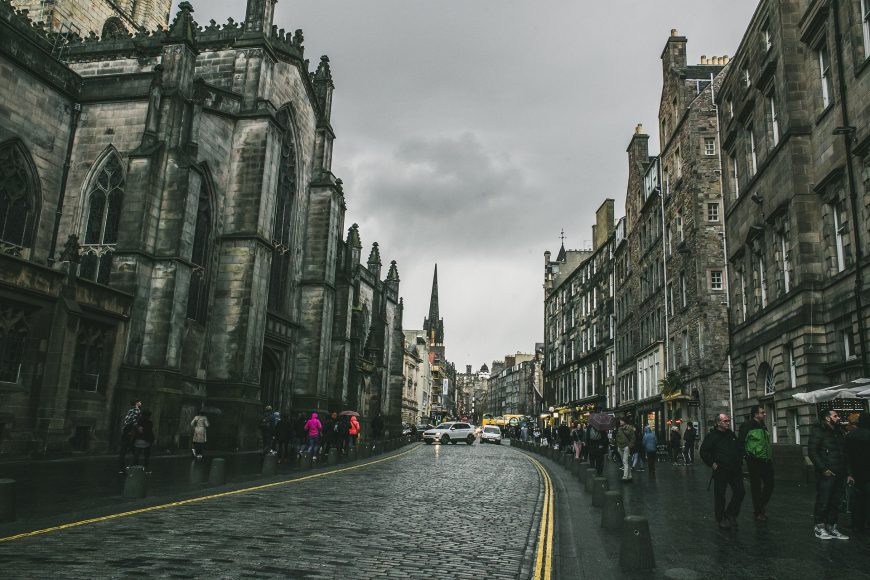 Next up on our exploration of haunted travel destinations is the capital of Scotland! Edinburgh is home to seriously haunted locations and active ghosts and other supernatural beings. Having served as the setting for battles, fights among bloodthirsty monarchs, and gruesome murders and witch hunts, Edinburgh has its fair share of spooky stories and haunted places.

Edinburgh is one of the UK’s most haunted cities and you probably won’t feel alone walking down the narrow streets at night in the historic center. With secrets buried in the city’s vaults and frequent supernatural activity in the city’s most famous graveyard, Edinburgh has a lot to offer those who believe.

Even non-believers won’t be able to deny the bone-chilling nature of some of Edinburgh’s ghost stories and grisly murders. If you’re looking for spooky tales and a little ghost hunting on your next adventure, Scotland might just be the place for you!

Ready to uncover the darker side of Edinburgh?

With its bloody history, it’s no surprise that the popular Edinburgh Castle has a few ghosts and hauntings along with the Scottish crown jewels and Stone of Destiny. Standing tall above the city, the castle dates back more than 2,000 years and the earliest ghost sighting is said to have happened in 1650 when a headless drummer boy was warning those around him of incoming danger. There’s also the famous piper who went into the tunnels but never returned, though the faint sound of bagpipes can be heard when there shouldn’t be any music.

The dungeons, once housing prisoners and enemies of Scotland, are another hot spot of the supernatural activity due to the torture and death sentences the victims went through during their stay at the castle.

Reports of paranormal activity in Edinburgh Castle include hearing drums and knocking sounds, spotting ghostly figures, finding random cold spots, something, or someone, tugging at your clothing, and capturing orbs on film. A paranormal investigation was done in 2001 as part of the Edinburgh International Science Festival and their findings supported some of the reports of ghostly activity.

Touted as Scotland’s Spookiest Street and located just off of the Royal Mile, Mary King’s Close was boarded up for quite a long time and finally reopened, though it seems other things came with it when they did open it. Legend says that victims of the plague were quarantined here and abandoned and then the street was bricked up to contain the disease. Since its re-opening, there have been sightings of a young girl around here as well as people hearing creepy, indecipherable whispers.

A cemetery always makes the list and the list of haunted sites in Edinburgh isn’t complete without mentioning Greyfriar’s Kirkyard! Since the kirkyard dates back to the mid-1500s, it’s not a shock that it’s home to some ghostly residents.

The most notorious haunting is that of the Black Mausoleum, which is the final resting place of Sir George Mackenzie, AKA Bloody Mackenzie who is said to be responsible for the deaths of more than 18,000 Scots. There have been hundreds of reports of poltergeist activity happening here after the mausoleum was disturbed in the late 1990s. Since then, visitors to the graveyard have received scratches, bruises, and cuts in violent attacks, as well as report that they felt sick or heard voices.

Under the South Bridge there 120 vaults, though the creepiest ones are located under Blair Street as they’re deep underground and eerily quiet. When the bridge was completed in 1788, the vaults opened as legitimate businesses but then after a few years the vaults flooded and seedier businesses took over the spaces the other occupants vacated. The vaults were now home to not-so-cozy pubs and brothels, and it’s even said that Edinburgh’s infamous body snatchers Burke and Hare, trolled the area for victims.

Now, the vaults are a popular stop on Edinburgh ghost tours where you might hear ghostly whispers or disembodied voices and footsteps or you might feel cold spots (and not the normal kind from being underground), or you might feel someone touching you. Many paranormal investigations have taken place here and even the TV show Most Haunted filmed an investigation here in 2006.

The Edinburgh Playhouse’s ghost is so frequently sighted that he has a name, Albert. Look for Albert on the sixth floor and you might just spot the ghostly figure wearing gray before being blasted by some cold air. Others have even reported hearing mysterious noises or getting the feeling someone is touching their shoulder. There are two theories of who Albert was when he was alive. One, is that he was a stagehand who died in an unfortunate acccident, and the other is that he was a night guard and committed suicide.

Once home to the Wizard of West Bow, Thomas Weir, the West Bow house is said to be one of the most haunted buildings in Edinburgh. Weir was executed in 1670 after giving a confession of talking with the dead and committing acts of bestiality and incest. After his death, passersby heard weird music coming from the house as well as seeing strange shadows in the windows. Today, Weir’s home has been opened up and added to another house and is now part of the Quaker Meeting House where staff members have reported seeing Mr. Weir walk through the walls.

The Grassmarket was once used for public executions and hangings, especially that of women who were pronounced witches even though they most likely weren’t. Many believe some of the innocent souls still haunt the area and like to focus on one particular pub, The White Hart Inn. The pub dates back to the early 1500s and there have been multiple reports of unexplained bangs and doors being slammed with no explanation.

With a name like that, it has to be haunted! This Edinburgh pub is located in the South Bridge vaults, number 4 on this list, and gets its name from the fact that it’s made up of seven vaults and a bit of a maze, hence labyrinth.

The banshee part is a bit more sinister as the pub is said to have a resident banshee who will scream out a warning that death is coming. The most commonly shared story is that of a group of men who heard the banshee’s cry and then one got a call that someone in their family died. Other reports have witnesses saying glasses have flown off the bar or tables and feeling a general sense of unease in the space.

Have you visited any of these haunted spots in Edinburgh? Tell us about your experience in the comments below or give us a shout on Twitter!

Where to go for a fun New Year’s celebration