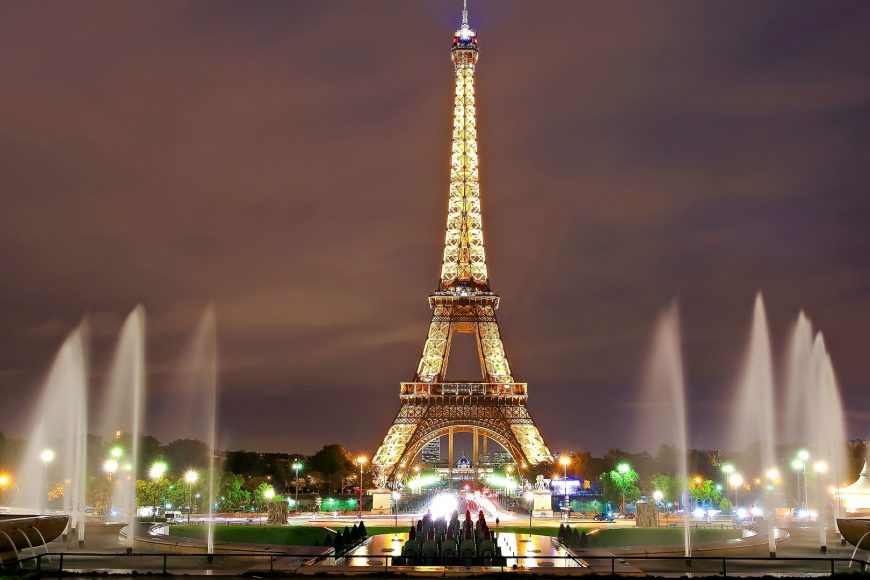 It’s Bastille Day, the commemorative holiday of the storming of the Bastille on July 14, 1789, and the launch of the French Revolution.

In honor of the historic event, we’re doing a deep dive on a famous Paris landmark that was built to commemorate the centennial of Bastille Day: The Eiffel Tower!

The Eiffel Tower was built for the Exposition Universelle in 1889 in honor of the 100th anniversary of the French Revolution. The Eiffel Tower was a bit of a revolution of its own in terms of construction and style and so it’s fitting that today we take a look back and uncover six things you might not know about the Eiffel Tower!

It took two years, two months, and five days to construct the Eiffel Tower. Construction commenced on January 26, 1887 and it was a true feat of engineering to complete it so quickly. There are more than 18,000 metallic parts the comprise the tower and its iron components weigh 7,300 tons.

2. The tower is painted every seven years

Her current color is “Eiffel Tower Brown,” which she’s been since 1968. She’s also been reddish-brown and yellow in the past. It takes 60 tons of paint to keep her color popping and looking fresh.

3. Parisian artists hated it – and were vocal about it

In 1886, La protestation des Artistes began which included pamphlets and articles protesting its construction. Many authors and artists signed the protestation and argued against it saying that it would ruin the beauty of Paris.

In fact, Guy de Maupassant was quoted as saying, “This high and skinny pyramid of iron ladders, this giant ungainly skeleton upon a base that looks built to carry a colossal monument of Cyclops, but which just Peters out into a ridiculous thin shape like a factory chimney.”

4. It’s the most visited monument in the world

The Eiffel Tower welcomes seven million visitors a year and has totaled more than 300 million visitors since its opening in the late 1800s. I’d also hazard a guess it’s one of the most commonly photographed landmarks in Paris but I couldn’t confirm my suspicion!

5. The designer also helped with the Statue of Liberty

Gustave Eiffel was hired as a replacement to finish the skeletal support of the Statue of Liberty in 1879. There’s a miniature State of Liberty in Paris as well, though she’s nowhere near as tall as her big sister in the United States.

6. The tower was saved by radio

Gustave Eiffel was given permission to let the tower stand for 20 years and many Parisians waited for it to be destroyed and then used for scrap metal. Eiffel planned ahead and added functionality to his creation by adding an antenna to the top, which was then used by the French military in the early 1900s and even helped catch the spy Mata Hari.

The Eiffel Tower was used to send telegrams and in 1913 its reach made it to America, then it transmitted a public radio program in 1925, and in 1953, the tower’s transmitter played a crucial role in televising the Queen of England’s live coronation.

What other fun facts do you know about the Eiffel Tower? Tell us the secrets in the comments below!

Barcelona: What to know before you go