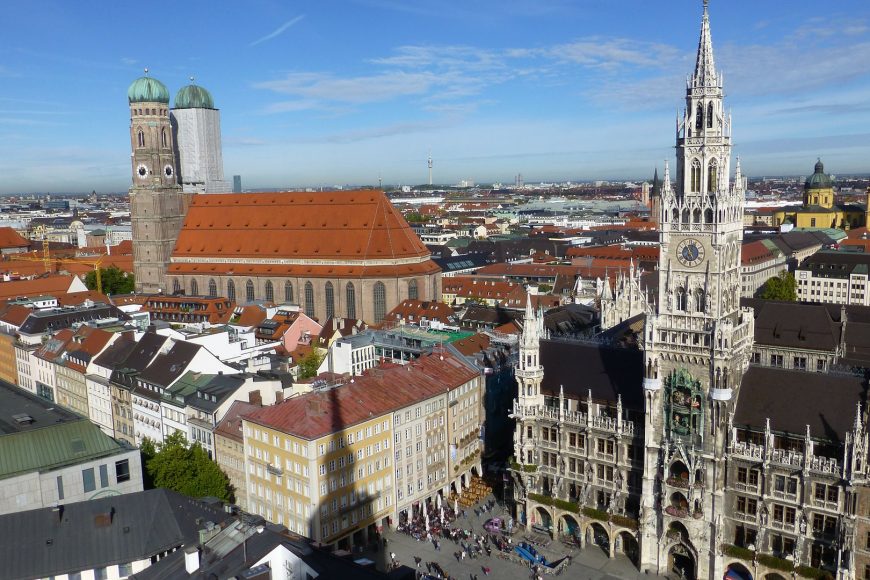 I loved exploring Munich, getting lost in its streets, wandering its parks and beer gardens, and sampling delicious Bavarian food and drink. There is no shortage of things to do and see here and we hope our Munich travel guide helps you better plan your trip to this iconic Bavarian city.

Munich, or München in German, is steeped in history, tradition, and modern charm and has amazing churches, beer halls, palaces, and museums. Munich is the capital of the state of Bavaria and was the capital of Bavaria when it was independent from Germany until 1871.

Today’s Munich is welcoming and offers something for every type of traveler. You’ll definitely want a few days to explore all that the city has to offer and you should start planning your trip now!

Let’s dive into our guide to Munich!

Munich is the capital of the state of Bavaria in southern Germany and has a population of about 1.5 million people and houses an international airport. It sits at an elevation of about 1,700 ft. above sea level and is about 30 miles north of the Alps and the Isar River winds its way through the city. It is also close to the German-Austrian border and Switzerland border. It only takes about an hour and a half to Salzburg in driving time and almost two hours to Innsbruck from Munich.

The weather in Munich is known for nice summers, cold winters, and a cool autumn – perfect for drinking copious amounts of beer.

Expect rain from March through June and bring some cozy sweaters when you visit for Oktoberfest! January is its coldest month and July’s claim to fame is both the hottest and wettest month.

*Be sure to dial 0049 if using a phone from abroad

German is the official language in Munich, but most people (especially anyone in tourism) speak English, but it does help to have a few German phrases up your sleeve before exploring the city.

How much does… cost? …  Wie viel kostet (vee feel kos-tet)

Want to learn German before you check out Munich? Read up on our tips for learning a new language!

For tipping in Munich, it’s pretty comparable to other European travel destinations where a tip isn’t expected but is appreciated. If you do want to tip, go with:

Getting around Munich is pretty easy and one of my favorite ways of getting around the city was by bicycle! The paths were easy to stick to and covered a lot of ground and made it easy to get to hidden paths and the Chinese Beer Garden.

Munich’s public transportation system is run by MVV and has buses, trams, and the U-Bahn and S-Bahn. We were able to navigate the bus schedule and ticketing system as well, just be sure to validate your tickets prior to getting on the bus!

You can get single tickets, single day tickets, an airport-city day ticket, or get free travel on MVV with the CityTourCard. A single day ticket for the inner district is 6,70 € or you can use the entire network for 13,00 €, the airport ticket is the same price for one rider.

Munich has some awesome neighborhoods and areas to stay and explore. Some of the most popular spots include:

There’s a great range of affordable accommodations and luxury rooms in Munich. We actually stayed just outside the city and took the bus into the city center. If you do want to stay closer to all the action (and beer) try one of these fabulous hotel options.

You definitely won’t get hungry or go thirsty in Munich! When dining, leave a few coins for the barman and round up your restaurant bill to the nearest 5€ or 10€ if the service was very good.

Not sure what to eat in Munich? Here are our picks for the must-eat foods in Munich:

What to drink in Munich

It’s almost impossible to travel to Germany without sipping some of their traditional suds. Go traditional with their beers by tasting their:

During your meals, cross your knife and fork on your plate if you’re not done. This tells servers that you’re still eating, but if you place your knife and fork in parallel on the right side of the plate, your waiter will understand you are finished.

Top 10 things to do in Munich

There are plenty of things to do in Munich and surrounding it. It’s totally worth the travel time to visit the castles or concentration camp memorial just outside the city, as well as devoting enough time to staying in the city to explore the plazas, churches, palaces, and refueling at a beer hall!

Want to blend in like a local as you make your way through Munich? Follow these rules of etiquette to understand their culture and daily life a little bit better.

We hope this Munich travel guide helps you plan your trip to this fantastic part of Germany! If we missed anything, please tell us in the comments or on Twitter!

10 free things to do in Edinburgh