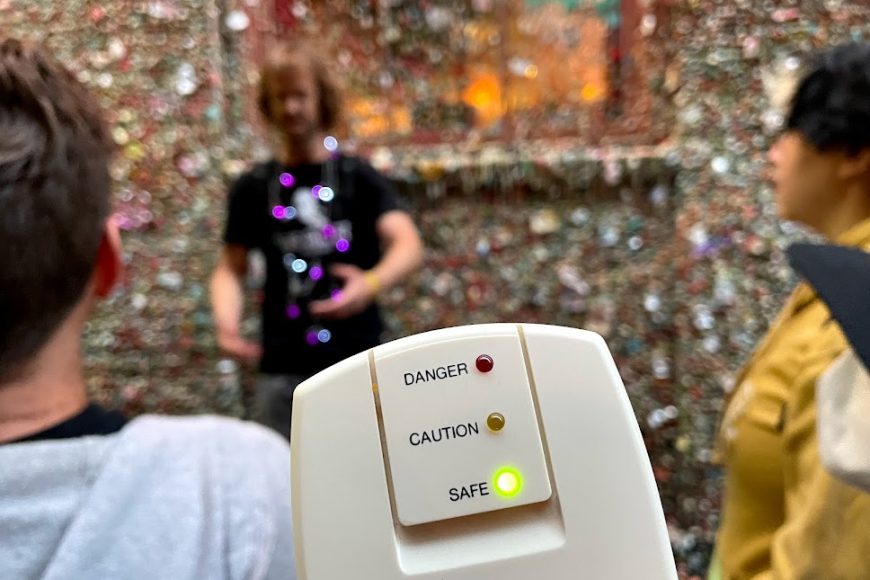 When I was in Seattle with my friends I made sure we did something that normally Rick and I do when we travel, no, not a food tour but a ghost tour! And now that the spooky season is officially upon is, it’s time to talk about it!

We booked the Seattle Terrors Ghost Tour and explored Pike Place Market and the surrounding area on an hour-and-a-half adventure discovering the darker history of Seattle.

The tour had a mix of ghost stories, history, and fun facts and it was pretty cool getting to explore the market after all the vendors had left for the day. With such a rich history, some of it tragic, it’s no surprise that Seattle is home to several haunted sites as well as has its own stories of the spooky nature.

This tour covered Post Alley and Pike Place Market and there were some very interesting stories, even if they weren’t all about ghosts and hauntings. If you want to hear about a scarier side of Seattle, you may want to book this tour! Check out my review to see if it’s right for you.

Review of the Seattle ghost tour

We opted for the extended version of the ghost tour which added a few more stops along the way and I’m glad we did. Our tour guide was a great storyteller and was able to hold everyone’s attention and answer any questions we had. The pace was great and we devoted enough time at each stop to fully explore the history of the place and what happened there.

The ghostly tales were rooted in history and were well-researched. I didn’t know what to expect with a Seattle ghost tour and this one did not disappoint.

We had about 20-30 people in our group and it was small enough that we could cross the streets together but not super small or intimate.

Tips for the ghost tour

Overall, the tour was a fun, dark history tour of Seattle. I would have preferred a few more ghostly stories or tales of hauntings but it was still a good walking tour that shed light on the darker side of Seattle’s history and helped me learn more about the city.

10 free things to do in Edinburgh