Top 15 things to do in Munich

Two summers ago, I went on a European road trip tour with some girlfriends and had the pleasure of checking Germany off my travel destinations bucket list! We had a little stop-over in Cologne to check out the cathedral and spent a night in Frankfurt and then made our way toward Munich.

As someone with German heritage, I’ve always wanted to visit Germany and I’m glad Munich was a part of that journey. We had a great time exploring the city, drinking beer, and seeing the historic buildings and stunning architecture.

Rick and I plan on going to Munich one of these years to check out Oktoberfest, especially now that Lufthansa offers direct flights from Denver to Munich! While we’ll get our fill of beer, brats, and pretzels, we’ll be sure to save some time for these other top things to do in Munich on our trip!

Best things to do in Munich

Get a liter of beer at Hofbrauhaus

Yep, I’m putting that as the number one thing to do as it’s a Munich experience you simply need to have to understand the Bavarian tavern culture – and there’s no better place than Hofbrauhaus! Marvel at the servers’ impressive arm strength as they carry what looks like 16 steins of beer to the table, devour a pretzel and Obatzda cheese, and enjoy live oompah music at this popular pub.

Just be sure to pack your lederhosen and drindl for the ultimate pub visit!

Stroll through the Nymphenburg Palace

Commissioned as a summer palace in 1664 by the Wittelsbach family, Elector Ferdinand Maria and his wife Henrietta Adelaide of Savoy, and to celebrate the birth of their long-awaited son, Max Emanuel. While it was originally built as a smaller summer destination, the estate expanded rapidly under guidance from Prince Max Emanuel.

Today, you can take in the impressive Grand Hall with its French-inspired architecture and design elements, walk the Hall of Mirrors, enjoy strolls in the gardens, like the Baroque garden, see royal stagecoaches in the Carriage House, or step inside the Royal Hunting Lodge  – complete with built-in sleeping nooks for the hunting dogs! During the summer months, you can even take a gondola ride in the central canal for 15 euro. 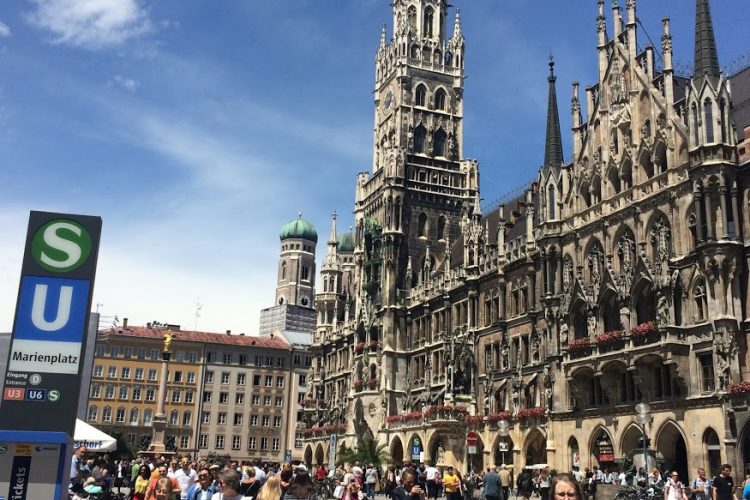 Check out Marienplatz and Odeonsplatz

Marienplatz is a central square that has been a popular tourist destination in Munich as well as a convenient spot for locals to meet for many years as it’s been the main square since the 1100s!

Highlights in Marienplatz include the Old Town Hall, the New Town Hall, and the Virgin Mary Column (Mariensäule) which was added to the square in 1638.

The Neues Rathaus, or New Town Hall, is a work of art itself and larger than life. The hall houses more than 400 rooms, six courtyards, and is dotted with stunning pinnacles and trefoil arches. You can’t miss the 280-ft., 100-year-old Glockenspiel with 32 life-sized figures reenacting scenes from Bavarian history.

Odeonsplatz is another great town square that’s home to Feldhernhalle, an open air gallery dedicated to the commanders of the Bavarian army. This square has seen its fair share of history, from being the site of the 1923 Beer Hall Putsch (and eventually the home to the monument honoring the 16 deaths of Nazi Party members) and was a spot for SS parades and rallies for Hitler.

Built in the 1300s, this royal castle was the home for Bavarian royalty but now safekeeps precious collections. The sprawling palace is home to the Antiquarium Hall, completed in 1568, where the royal family stored antiques, art, and books. Here, you can also visit the Royal Portrait Gallery, the Residence Theater, and the Royal Treasury where you can see the Royal Jewels and pieces collected from ancient Egypt. 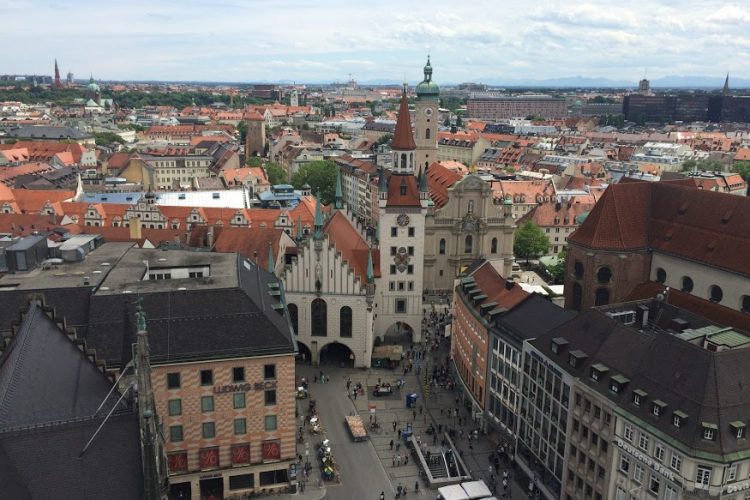 See Munich from above

There are a few options to enjoy a bird’s-eye-view of Munich! See the city sprawling out below you from Neues Rathaus or the New Town Hall of Munich, climb the tower at Frauenkirch for a great view of the city and the Alps, or ascend the 299 steps to the top of St. Peter’s Church for an unforgettable, panoramic view of Munich.

Literally the “Old Picture Gallery,” the Alte Pinakothek houses an impressive collection of more than 700 European paintings and artwork from the Middle Ages, the Renaissance, the Baroque, and the Rococo period (essentially the 1200s to the late 1800s). The works are on display in a neoclassical building built in 1836.

Visit the beer gardens or halls

Yes, yes, I know Hofbrauhaus is a beer hall, but it still deserves its own mention. On our trip, we took a bike tour through Englischer Garten and it was a great way to explore the garden and see city sights along the way – like the public surfing on the Eisbach River. We stopped at the Chinese Tower in this Munich beer garden, which is bigger than Central Park in New York City, for some beer, light snacks, and a rest. The Garden is also the home to the Japanese Teahouse.

Another option in Munich is the Augustiner-Keller beer hall. Known for their fresh, wood-barreled beer and traditional Bavarian pub fare, you can’t go wrong with a pour of their traditional beer when you visit their beer garden. As the oldest beer garden in Munich, it has 5,000 seats and hasn’t changed much since 1895.

Munich boasts an array of beautiful and historic churches. Whether you want to see the fantastic architecture or pay respects in the house of God, you can easily do so in Munich. What churches should you see in Munich?

Walk through history at the Bavarian National Museum

As one of the largest art museums in Germany, it’s particularly known for its royal art of the Wittelsbach and its medieval and folklore collections. From ceramics to textiles, you can explore artwork from around Europe and getting a better understanding of its history at the Bavarian National Museum. 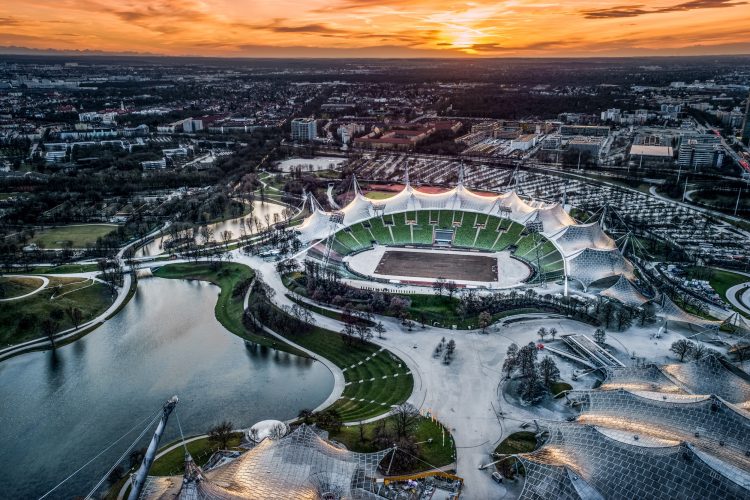 Built in 1972 for the Summer Olympic Games, Munich’s Olympiapark is an open air park with sports facilities, watersports on the artificial lake, and a zipline, and hosts many public events. Take a ride on the Olympiaturm to the observation deck or visit the revolving restaurant – it takes almost an hour to make a full revolution. 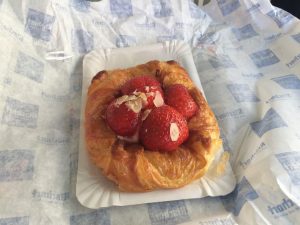 When the original market at Marienplatz grew too large, it was moved to where the Viktualienmarkt is today. At this outside market, you’ll find wine, cheese, sausages, olive oil, pastries, fresh fruit, and much more for sale. There’s also a beer garden, both self-service and serviced seating, where you can bring in your fresh produce, grab a beer, and enjoy some a delightful picnic al fresco. The beer served at the garden does rotate every six weeks and features brews from Hofbrau, Spaten, Augustiner, Hacker-Pschorr, Lowenbrau, and Paulaner.

This geo-zoo is home to more than 20,000 animals that live according to their home continent to mimic as closely as possible the settings they’d have in the wild. From giant elephants to small seahorses, the zoo is home to a wonderful array of animals from Australia, Africa, America, Asia, Europe, and the polar worlds.. Founded in 1911, the zoo acts more as a conservation and is designed to be a safari-like experience. 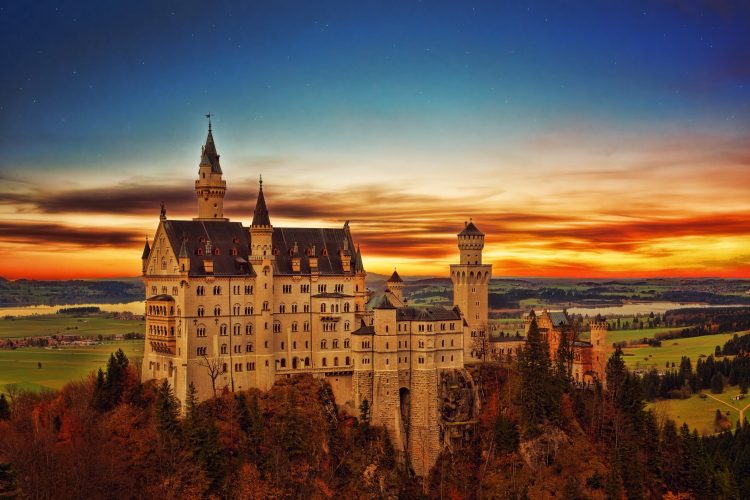 Feel like you’ve stepped into a fairy tale or Disney movie when you visit Neuschwanstein Castle! Built for King Ludwig II to escape public life, the castle spans more than an estimated 65,000 sq. ft. and was opened just seven weeks after his mysterious death in 1886. He actually never saw the completed castle either as the towers were finished in 1892.

The castle was built with every bell and whistle the King could afford. The palace had running water, both hot and cold, heating, flushing toilets, lifts, and an electric bell system to summon servants. The fairy tale castle was an inspiration for Disney and has been credited as an homage to the composer Wagner.

Please keep in mind that unfortunately you cannot take photographs during your castle tour.

You can either pay for transportation to the top or walk/hike the trail up to the castle. I loved the walk as it’s scenic and you can get some great photos along the way.

Sadly, the bridge was closed when we visited, so hopefully when Rick and I go, we can view the castle from this popular photography spot!

10 miles outside Munich is the Dachau Concentration Camp Memorial. Words can’t describe how moving this memorial is and walking in the footsteps of the victims of the Holocaust is an emotional experience.

Dachau was opened in 1933 and became the model for all other concentration camps and served as a “school of violence.” You can visit the former maintenance building, the roll-call area, the reconstructed barracks, and crematorium among other memorials and sites.

Almost 68,000 registered prisoners were at the camp as American forces approached in 1945. By then, more than 200,000 people were imprisoned there and more than 41,500 were murdered. Seeing the conditions the prisoners lived in, seeing the buildings where horrible crimes against humanity were committed, and seeing the fencing systems and hearing the stories of those that tried to escape, and almost worse, the ones that couldn’t, is heart-wrenching. It can be difficult to walk around the camp but it’s also extremely important we remember what happened here and do everything in our power to never let it happen again.

I don’t know how anyone can visit Germany and not take home a souvenir stein! Whether you stick with traditional souvenirs like authentic clothing or home goods or something monogrammed with Munich a billion times, there are plenty of excellent shopping opportunities in the city squares to satisfy your shopping craving.

What would you recommend for a first-time visitor to Munich? Tell us in the comments below! 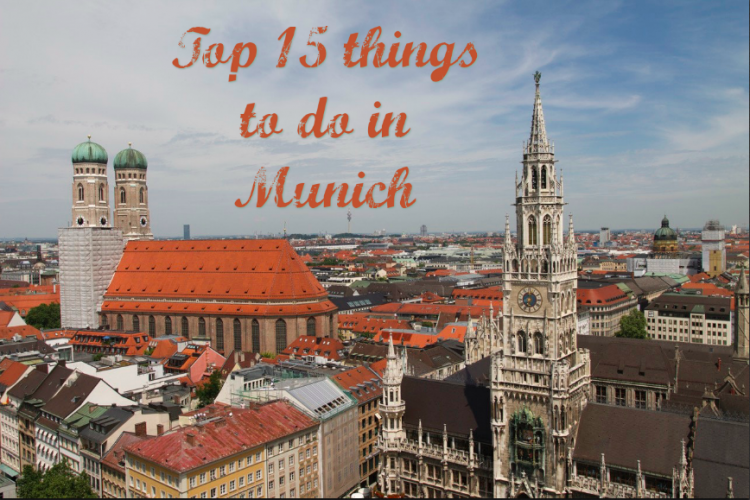 7 haunted hotels in Colorado guaranteed to give you the chills