The Eternal City, or the city we can return to for eternity. Seriously, there’s never a bad time or bad reason to visit Rome. Even if you only have a day to explore it!

There are so many things to do in Rome and with being able to walk between major sights or hopping on the train to get all the way to the Vatican, it’s super easy to discover this historic city.

Just be sure to book any tickets or tours well in advance, especially in the summer, to better plan and time your Rome itinerary.

I’ve done Rome both on a tight schedule and at a leisurely pace. However you choose to explore this vibrant Italian city, you’re sure to have a wonderful time.

If you do find yourself with only a day there, here are our picks for the best things to do in Rome!

Start your morning bright and early with skip-the-line tickets for the Vatican at 9 a.m.!

When visiting the Vatican, you’re actually visiting the world’s smallest country! Vatican City spans 100 acres and is an independent city-state with the pope at the head of the monarchy. With your ticket in hand, you can tour the Vatican Museums, full of beautiful Renaissance art, listen along to your audio guide for commentary, and be awed in the Sistine Chapel as you take in the stunning works of Michelangelo.

Outside, enjoy neat views of the buildings and fountains.

Fun fact: The Swiss Guard, yes, the men in the bright pantaloons, has served the pope since 1506. Don’t let their colorful costumes fool you, they are trained and ready to protect. The guard is also fully comprised of Swiss citizens. Sorry, Italians.

Get a bite at Bonci

This was one of Rick’s must-dos in Rome and it did not disappoint. With about 15 different pizzas to choose from, you simply say how much you want, they cut it, heat it, and you eat it. It’s a bit behind the Vatican but well worth the trek for some delicious pizza and fun takes on arancini – definitely order the carbonara version!

Depending on the time you go, expect a wait. Grab your ticket as soon as you get there and when your number is called push your way to the front of the crowd to place your order.

After your filling lunch, take the train to the Circo Massimo metro stop for your next sightseeing stop in Rome.

En route to the Colosseum, take a lap around the Circus Maximus – where the chariot races were held starting in the 6th century. Though most of the surrounding structures are gone, you can still walk along the dirt path that traces the original racetrack in what’s now a public park.

Step inside the Colosseum

Probably the most famous landmark of Rome, the Colosseum (originally called the Flavian Amphitheater) awaits. Join your guided tour for a walk around the ruins and learn more about ancient Roman culture and about the lives of the gladiators. You can see where the emperor sat during the games, where senators and their wives would have sat, as well as the common folk, and see where they hid the animals under the stage.

Listed as one of the New Seven Wonders of the World, it’s estimated that this arena could hold up to 80,000 people to witness the games and battles performed here. The story goes that Trajan celebrated his victories with contests spanning 123 days and included 11,000 animals and 10,000 gladiators.

You’ll have time to explore a bit on your own and snap some great pictures of both the inside and outside of this famous Roman ruin. It’s definitely one of the most popular things to do in Rome!

Make a little pit stop at the Arch of Constantine, dating from 315, on your way to the Roman Forum. Here, you can see the ruins of ancient government buildings and learn about the important role the forum played in the daily lives of Romans.

With your guide, you’ll learn about the life of a senator and Roman politics, as well as get an idea of where the temples stood – most notably the Temple of Saturn whose columns still stand – as well as the home of the Vestal Virgins.

After your tour of the Roman ruins, take the metro from the Colosseum to Spanga to get to the Spanish Steps. I suggest grabbing a glass of nice Italian wine at an enoteca while you wait for your next activity in Rome.

From 4:50 – 6:50 p.m., you’re off to learn more about the city on a sightseeing tour of Rome! Meet at the Spanish Steps before visiting Bernini’s Angels, the Column of Marcus Aurelius, the Temple of Hadrian, the Pantheon, and the Trevi Fountain, among other top attractions.

This two-hour Rome walking tour is free, but you can always tip or pay what you think it was worth. It’s an affordable way to tour the city and learn some interesting trivia along the way.

Stop at the Trevi Fountain

Since your walking tour ends at the Trevi Fountain, it’s the perfect place to relax, enjoy a romantic moment, and toss your coin into the water to ensure your return to Rome. All the coins tossed into the fountain are collected by the city and donated to charity.

This popular fountain is a must-see in Rome and offers some great photography opportunities.

After making your wish to come back again, it’s time to gorge on some authentic Italian food at dinner. Head away from the touristy squares to find a nice restaurant for a good meal – obviously served with some delicious Italian wine, like barolo, chianti, or montepulciano.

Some of the best foods to eat in Rome include:

Treat yourself to gelato

I probably had gelato at least twice a day, maybe even three times a day, when Rick and I were in Rome. With creamy, and decadent pistachio and hazelnut gelato waiting around every corner of the Eternal City, it was pretty easy to try many samples from the many gelaterie.

Learn where to go for the best gelato in Rome in a previous post!

Did we miss any must-dos in Rome for our one-day itinerary? Tell us in the comments below or on Twitter! 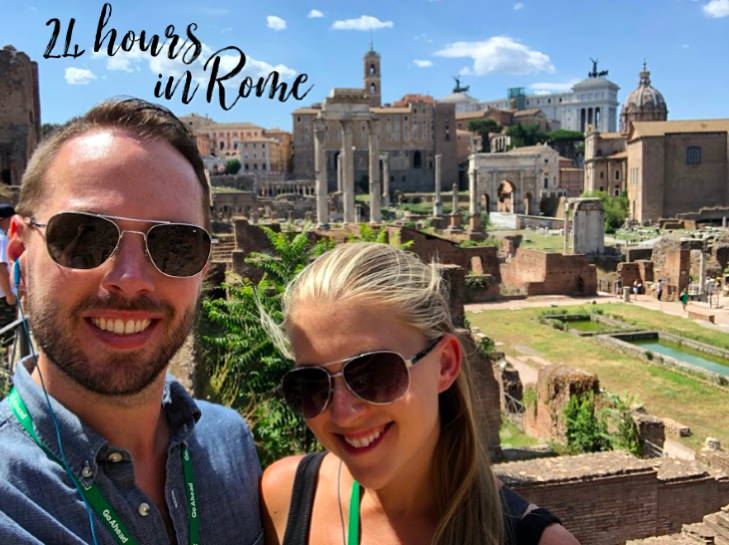